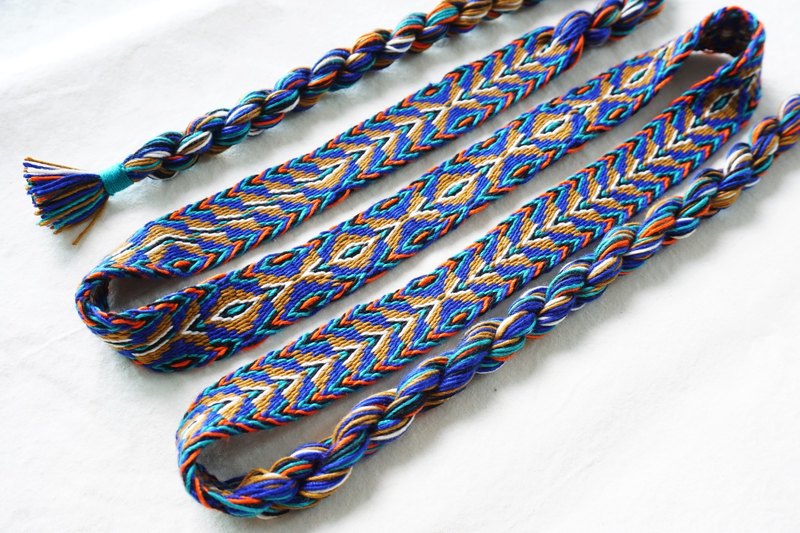 When traveling in Central and South America was deeply attracted fabric process thus began learning web authoring, traditional weaving techniques principles woven into a single graphical use small changes can weave on a long ribbon of continuously producing several patterns, old the ever-changing technology, are all personally designed pattern. But when the camera strap, belt, hat around ~! When traveling with a tied very nice! [Hand-woven ribbon Origin] Before the advent of loom weaving technology is a set of tools by a thin piece of slate in the four corners of a hole after threading consisting of a piece of stone cutting four holes ripped into each line, the larger the width of the fabric need more plates, for example: 15 sheet you need to use 60 lines. After finishing tied warp straight after from start to finish and then a staggered by a weft woven into the transverse ends of wear, so use this approach produced the ribbon structure is very strong, initially applied to the reins, Tie, modern can used hand ring strap belt ornaments other purposes. Not know the original source, reportedly began in the Iron Age, medieval quite popular in Europe, and a few per person lives, this technology appears after loom slowly disappear until 1896, the German scholar Margarethe Lehmann-Fihes after Ms. sheet and found this ancient weaving techniques used webbing used in the museum, in order to implement a way to re-construct scrutiny this ancient craft, that makes this technology has spread, can understand the principle of their own design pattern and color. At about five working days to order Width 2.2cm / total length of about 125cm Origin / manufacturing methods Made in Taiwan handmade Origin / manufacturing methods Made in Taiwan handmade