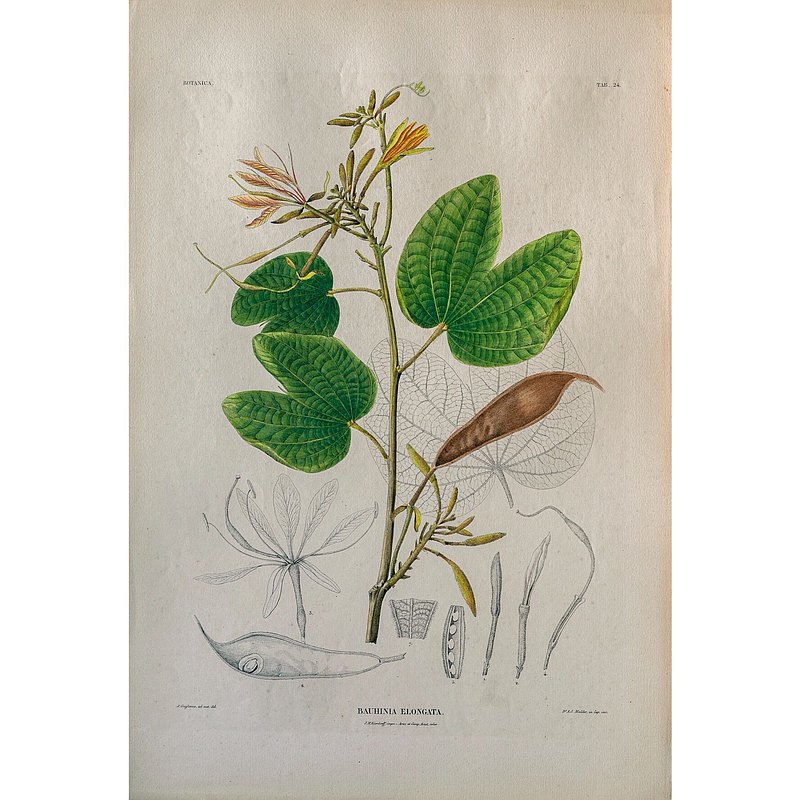 【Picture 1-Picture 2 are the original pictures】 [Figure 3-Figure 6 are schematic diagrams] Author: Pieter Willem Korthals (1807/1892) Name: Legumes (Bauhinia Elongata), Figure 24, from: [Natural History of Dutch Overseas Territories] (Verhandelingen over de natuurlijke geschiedenis der Nederlandsche overzeesche bezittingen by CJ Temminck, published in Leiden by S. en J. Luchtmans en CC van der Hoek). Signed: J. Gaykema/ AS Mulder. Technique: Copperplate, hand-painted and painted. Period: 1839/1844. Size: 31×45 cm (picture). 40 x 50 cm (including jammed paper). Remarks: with cardboard mounting (without frame) Number: P DFH-10 Introduction of works: The Netherlands came to Java in the 16th century, and captured Jakarta on the island in 1619. It was named Batavia at the time, and the Dutch East India Company was established here. In 1799, the East India Company was disbanded and taken over by the Dutch government. The century of Dutch East India began. It was not until after World War II that Indonesia, with the help of the Japanese army, fought the Netherlands. In 1949, Indonesia finally became independent. [Minutes of Natural History of Dutch Overseas Territories] A book published in 1839/1844 for the Dutch government to gather related scholars to study the natural ecology of the Dutch East Indies, which is today's Indonesia. The book is divided into three parts: Zoology, Flora and Ethnogeography. The book has 1,379 pages and 258 illustrations. Among them, there are 102 illustrations of zoology, made with lithograph, 82 of them are hand-painted; 70 illustrations of flora, made of copperplate (part of lithograph), 66 are colored; 86 of ethnographic geography, made of lithograph, 29 are colored. The flora part was compiled by Dutch botanist Pieter Willem Korthals (1807/1892). From 1831 to 1836, Kotas served as the official botanist of the Dutch East Indies. Many of his discoveries are about the medicinal plant Mitragyna speciosa, which is native to Southeast Asia and is coffee A tropical evergreen tree in the family, it has been used as a herbal medicine since at least the nineteenth century, with opioid properties and stimulant-like effects. In 1839, Kotas published the world's first monograph on Nepenthes—[Over het geslacht Nepenthes] (Over het geslacht Nepenthes), which was included in the [Natural History of Dutch Overseas Dependencies]. In this book, he also recorded many plants that first appeared in the literature. Leguminous plants (Bauhinia Elongata = Fabaceae), also known as Papilionaceae and Hematoxylinaceae, are named for the first time by the Kotas record.