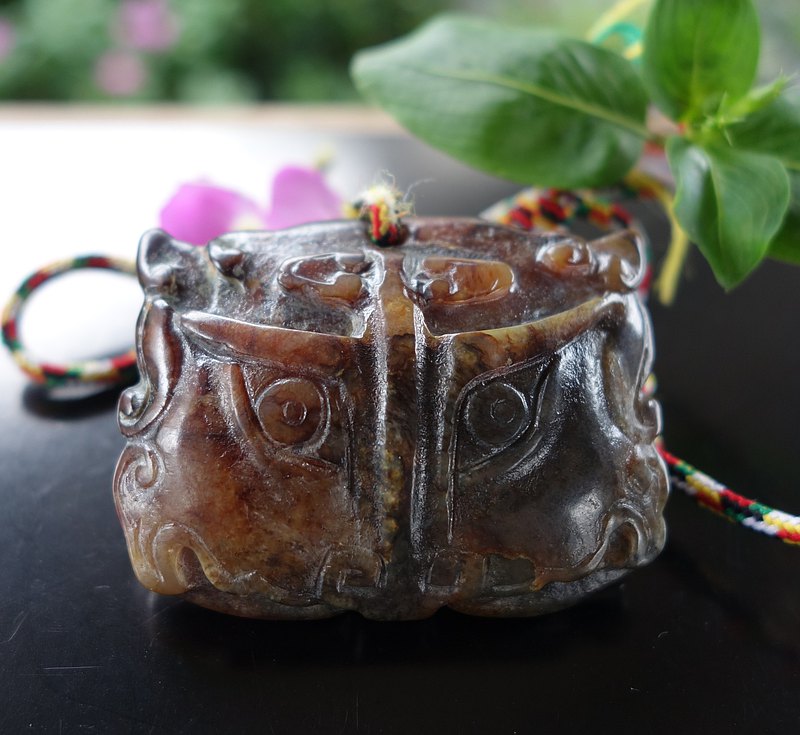 This Western Zhou Dynasty high ancient jade gluttonous pattern jade brand is fully in line with the characteristics of the unearthed ancient jade. It is a very open high ancient jade, with a regular and dignified shape, one side decorated with gluttonous patterns, exquisite patterns, exquisite carving, smooth lines, plain patterns on the back, and heavy patina. . There are perforations on it, easy to wear, full appearance, worthy of collection! The gluttonous pattern, also known as the animal face pattern, is typically characterized by a frontal animal head with symmetrical double horns, eyebrows, ears, nose, mouth, and chin. Some scholars believe that the gluttonous pattern is an animal, Such as dragons, tigers, buffaloes, and sheep as prototypes. Some scholars believe that the gluttony pattern originated from the beasts that helped wizards communicate with humans and gods. Some scholars believe that the gluttony pattern originated from prehistoric images of the sun god, painted on the face and organs of wild animals, and has a strong mystery. It prevailed in prehistoric, Shang Dynasty and early Western Zhou Dynasty. PS After retiring from the public service ten years ago, I established a "Shanqi Art" studio with antique Wenwan collected 30-40 years ago, mainly including Shoushan stone, amber, ancient jade, and miscellaneous items. Currently opened in Pinkoi The "Shanqi Art" design hall has sold collections for at least ten years. Although the items on Pinkoi are mainly original and designed, I also hope that some young friends will be interested in antiques and cultural relics, and then bring society into the realm of culture and art. , And art investment is also a kind of ambition for young people!