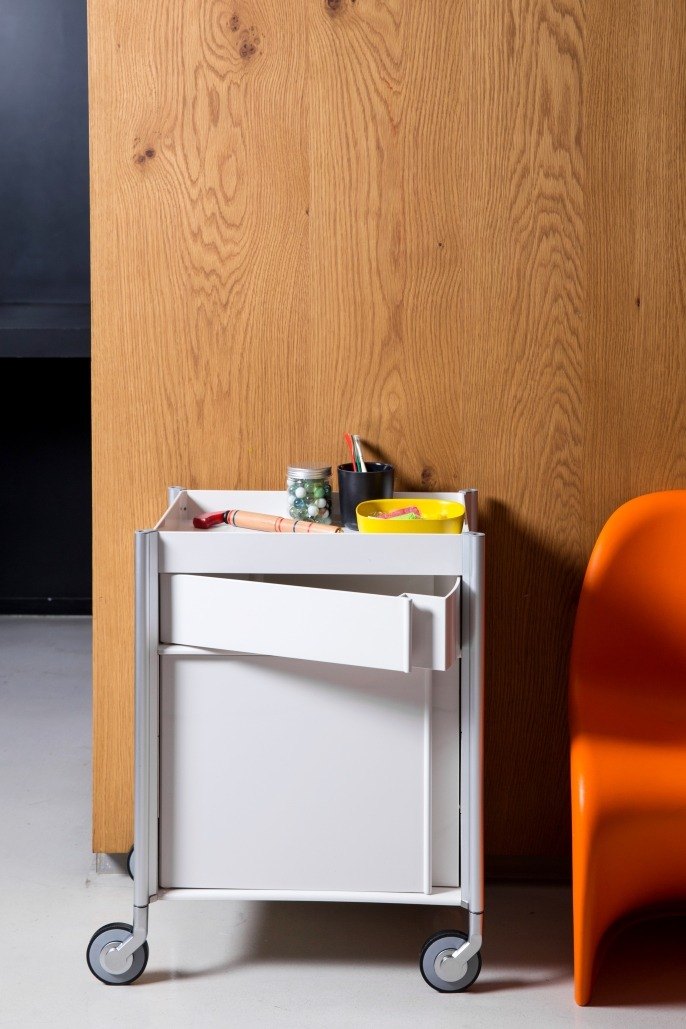 The modular construction kit for the trolley consists of 7 different plastic parts, which are joined by corner profiles made from aluminium. Depending on which pieces are selected and at which point in the construction process, anything from a simple set of shelves to a piece of furniture with doors and/or drawers can be created. The result is a variety of useful trolleys for the bathroom, office, kitchen and other living and working areas. The high-quality, glossy ABS surface gives the furniture a touch of elegance and a modern feeling, while the reflections in the surfaces form a lively contrast to the mechanical use of shapes of this product. Awards: iF design award China 2007 Good Design Nominee of Designpreis Deutschland 2010 Materials: ABS / Anodized aluminum / Wheels in zinc die-casting / Metal wire with powder coating Dimensions: 480 x 340 x 620 mm Designed by: speziell® - fleckenstein pohlmann schwer gbr., Germany /speziell® Designer Team/ The speziell design agency seeks what is special in the ordinary. When Sybille Fleckenstein, Jens Pohlmann and Thilo Schwer founded their design agency in 2002, they called it speziell (special) in order to express their aim of seeking a unique, surprising and special solution for every project. The three product designers believe in the strength of a design process to which different team members contribute their different experiences and priorities. This enables pithy solutions to be created which focus not on an individual’s ego but on a jointly discovered approach. These are subtle designs that display exceptional functionality, allow emotional aspects to be incorporated, are thought out in detail and for which a holistic concept can be found that fits in exactly with the brand and company. It is this handwriting of the team that provides the designs of speziell with a strong and self-contained character but without ever appearing artificial or exaggerated. The speziell design agency has became known internationally above all through its innovative surface design for the Thuringian porcelain manufacturer Kahla: The flock elements on plain white porcelain caused a stir in the sector and also significantly enhanced the company’s brand awareness. Prizes speziell received for “Touch” included the Red Dot Best of the Best and the if-Award. The focus of the design agency’s work lies in the furniture, kitchen and bathroom areas; the projects range from lighting to office furniture and from porcelain sets to trade fair stands and have received numerous design awards. The long-standing customers of speziell include Siematic, Rolf Benz, Kahla, Sedus Stoll, Messe Frankfurt, Anthology Quartett, Steng Licht and Studio Domo.