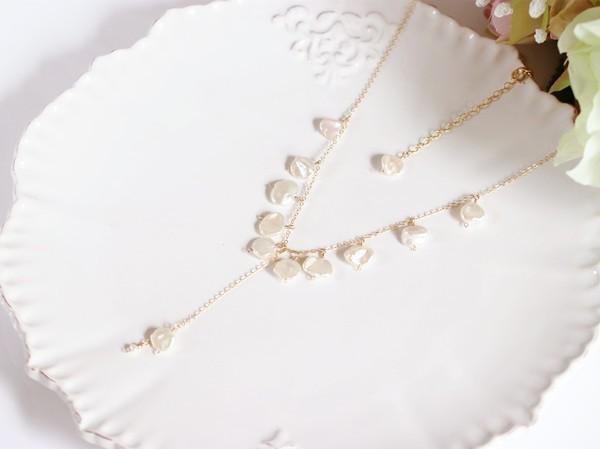 The charm of Baroque Pearl is its unique shape. It is a great attraction that there are no two identical forms in the world, as a result of chance in nature. It is also a popular secret that it is more compatible with casual styles and easier to use than usual, because of its shape compared to round pearls. "Fitting material": All K14GF "stone": Baroque pearl (pearl): about 7-8mm, good "Full length": Approximately 40 + 5cm adjuster, Y-shaped top approximately 6.3cm * We try to shoot in colors that are as close as possible to the actual thing, but it is the characteristic of natural stone that the impression changes depending on the condition of the light. ************ June birthstone. The stone words are "health, wealth, longevity, and innocence." Freshwater pearls bring happiness Freshwater pearl is considered to be a stone with strong power to repel evil. It is said that it has the effect of improving the environment so that people who have it can be happy every day. Pearls are not stones correctly. However, freshwater pearls are said to purify negative energy and shine attractiveness, and are treated as power stones, as they have various other expected effects. Freshwater pearls are known as jewels of love because they have the power to exterminate evil and attract the hearts of the opposite sex, and are often used at weddings. Freshwater pearls are said to have strong protection since ancient times and protect their owners. It can also be expected to eliminate depression and irritation. Because they have the strongest protection, they also have the power to protect children from accidents and illnesses. It has the same effect as shellfish loving pearls and growing them in the body, and is also effective as a talisman for pregnant women and safe delivery. For the same reason, it is expected that children will be blessed. Freshwater pearl that enhances femininity and is effective for beauty and health Freshwater pearls are said to have the effect of enhancing the maternity and beauty and femininity of women when worn, and in the old days, Cleopatra was said to have worn it as a charm for beauty. Wearing freshwater pearls brings out the good aspects of women, has the effect of coordination, and enhances the feminine beauty both inside and out. It has long been believed that this stone has the power to maintain youth and health. ************ -K14GF (14 gold gold filled): Unlike the thin gold plating of the gold layer, it is a gold layer weighing 1/20 of the base metal pressed by heat. ************