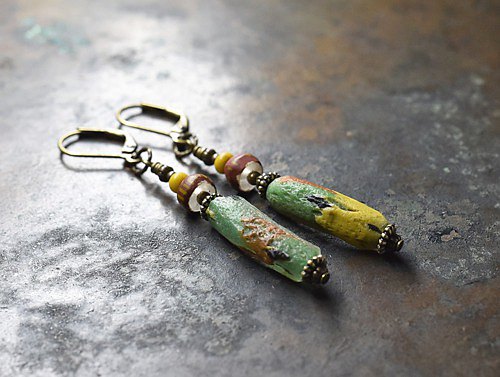 These pierced earrings are made by connecting two antique beads to Roman glass with a mosaic pattern. Roman glass is a glass from the Roman Empire (27 BC-395 BC). What used to be a ring-shaped bangle is missing, and since it is used as beads, it is slightly curved. It is a Roman glass that makes you feel as if you are looking at an abstract painting. Since it is old, it has a small shaving. It is a little translucent. Yellow beads are antique beads called Indian Pacific beads. The origin of Indian Pacific beads is said to be in the 2nd century BC. These beads are from Indonesia. What is the age! It's around the 10th century, so it's more than 1000 years old! Reddish brown beads are Venetian antique beads called chevron beads. (19th-20th centuries) Chevron beads means "Yamagata" in English. (Roseta in Italian) Beads, also known as bead aristocrats, are expensive and important. The reddish brown beads have a clear core! !! Yamagata is worn and cannot be confirmed, but it is a very rare bead. It is a pierced earring that you can feel the flow of passing time in the withered taste. You can change it! ] Hook type earrings Screw Clip-On(with Clip-On cover!) Length: Approximately 6.2 cm (including pierced earrings) Weight: Approximately 2.5g on one side (4.9g on both sides) Material: glass, brass