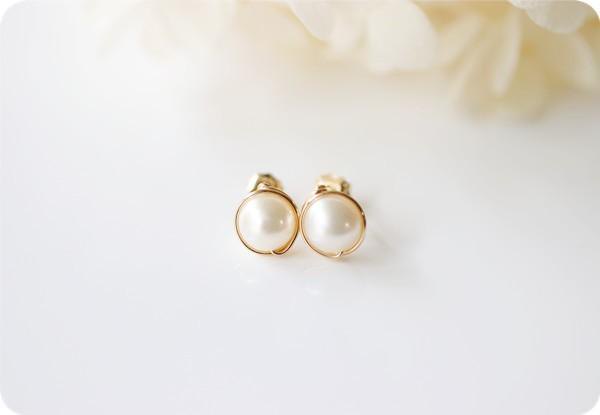 ~~~ Wrapping with ❄ + 250 yen ♪ ~~~ Instagram: ralulushu works videos are also being uploaded ・ Material -14kgf -(Button type) Poppy freshwater pearl (pearl): about 7.5 ~ 8.5mm Loose spots and scratches: There is little or no front, there are side etc. Teri: Very good (RALULU.SHU uses real freshwater pearls, not cheap shell pearls and Swarovski pearls) Why not use shellfish pearls? The price is cheap, there is no scratches, and the shape is good, but it looks cheaper than natural pearls, and there is no elegance. ✳︎ Due to the design, the post may be deformed! * We try to shoot in colors that are as close as possible to the actual item, but please note that the impression of the light changes depending on the condition of the light. ************ This is the birthstone for June. Stone words are “health, wealth, longevity, innocence” and so on. Freshwater pearl that brings happiness Freshwater pearls are considered to be strong stones that repel disasters. It is said that it has the effect of improving the environment so that the daily lives of those who have it can be happy. Pearls are not really stones. However, freshwater pearls are said to give negative energy and sparkle their attractiveness, and because they are expected to have various other effects, they are treated as power stones. Freshwater pearls are known as love jewels because they have the power to attract evil and attract the opposite mind, and are often used in weddings. Freshwater pearls are said to have strong protection from ancient times and protect their owners. You can also expect the effect of eliminating depression and annoyance. Because it has the strongest protection, it has the power to protect children from accidents and illnesses. It has the same effect as the power of shellfish to cultivate pearls in the body, and it is also effective as a maternity and safe birth amulet. For the same reason, it is expected to have a blessing to children. Freshwater pearl that enhances femininity and is effective for beauty and health It is said that freshwater pearls have the effect of enhancing women's motherhood, beauty and femininity when worn, and in the old days Cleopatra is said to have been worn as a beauty charm. Wearing freshwater pearls will bring out the good aspects of women, and will have a collaborative effect. It has long been believed that this stone has the power to maintain youth and health. ************ ・ K14GF (14 gold gold filled): Unlike gold plating with a thin gold layer, a gold layer with a weight of 1/20 of the base metal is heat bonded. ************