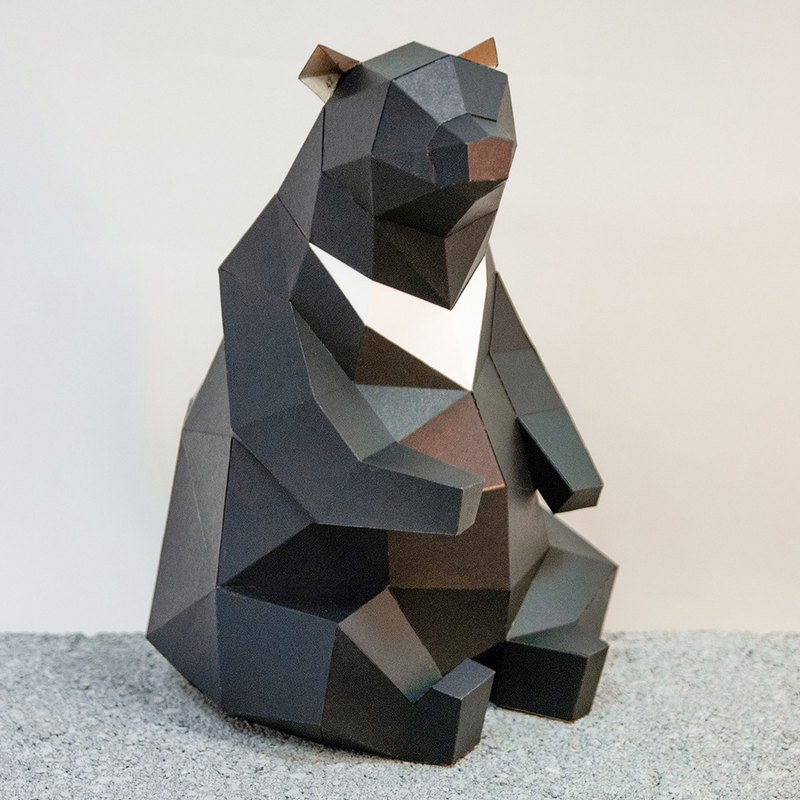 Small animal series Features: A variety of styles, the size will not be too large (the longest side does not exceed 30 cm) Suitable for placing on the table Difficulty is relatively simple, even a clumsy person can get started Fatty Taiwan Black Bear Difficulty ★★ ☆☆☆ Finished size approximately 25x18x19cm Number of sheets: 7 ─ A small gift, there are fish to eat ─ Give a small fish (white) Finished size approximately 8.2x3.5x1cm Be careful that the fish is not taken away by the cat The Taiwan black bear is the only bear species native to Taiwan, and is a unique subspecies of Asian black bears in Taiwan. Due to the overexploitation of Taiwan's natural environment and various human disturbances, it is classified as a conservation animal of "endangered species" In recent years, the concept of conservation of Taiwan and the people, Taiwan black bear has become one of the famous images of Taiwan The ears are large and round, and the small eyes are like the kisses of dogs, so they are also called "bear bears" There is a light yellow or white V-shaped or crescent-shaped logo on the chest, and it is also called "Moon Bear" Although black bears are huge, they are great athletes !!! Good at wading and climbing trees, almost the speed of a motorcycle when running! ? The range of movement is wide, with the size of more than 15,000 football fields. They mainly use the nose to feel the world, and use their sensitive sense of smell to find food and black bear partners. Walk on all fours, but sometimes stand up on the hind feet. With long claws and thick pads, correct! Bears have five fingers on their hands and feet like humans. The strong claws can climb trees very well, and they are not as bulky as they look. Tell a little secret: The Taiwanese black bear will fold the branches and make a large bowl-shaped bird nest to rest. It is a bear that only builds nests on trees !! When excretion, it will also be aimed outside, not dirty his nest, good cleanliness This special nesting behavior has not yet been found in other bears, is it very smart! However, in Taiwan, many black bears were caught by beast clips and trap injuries when they were found, resulting in missing palms and broken toes ... Causes survival difficulties and death, I hope everyone will resist poaching and trapping in the mountains and forests, the mountains are their homes In 2019, the most popular and moved event in Taiwan It ’s that Nanan Cubs succeeded in releasing the forest, and the lovely girl returned to her home. I hope she will never meet human beings again, will meet many flaming companions, survive and reproduce in Taiwan with peace of mind In fact, Taiwanese black bears will not actively attack humans If you encounter it, it is best to retreat quietly and slowly. Do not scream and attack in panic. This may cause the black bear to be frightened. Humans do n’t climb trees when they reach bears, because he is the master of climbing trees. Bears are omnivorous animals and eat carrion, so people who pretend to be dead are likely to be mistaken for "carrion" by bears The last ending is "really eaten ..." I thought, We made a paper model decoration and watched the cute Taiwanese black bear model, Thinking of his deity running freely in the mountain forest, Best wishes ─ Product Features ─ Simple block style LOWPOLY All original design, all exclusive shapes Made in Taiwan Product photos are taken Exclusive cover for styling Illustrated with DIY teaching instructions ─ Paper Features ─ No added phosphor, so that children can feel more at ease in the process of making White kraft paper: white kraft cardboard, not pure white and thicker paper, can be directly colored and beautified after completion Black kraft paper: the paper is thicker and harder, and the finished product is more textured ▲ This item is not color-selectable