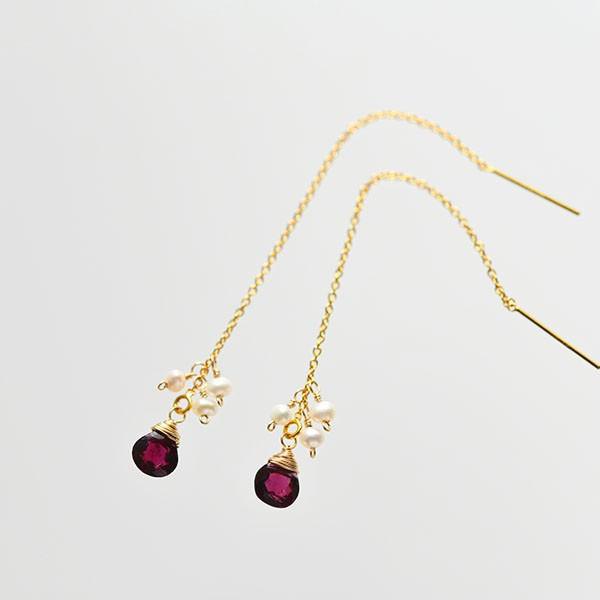 ~ ~ ~ ❄ + 300 yen wrapping possible ♪ ~ ~ ~ Instagram: ralulushu Movies Uploading videos etc. ************ It is a beautiful purple red red road light garnet American earring with depth. Above the Heart's Roadlights Garnet, add 3 baby pearls, goods are good ~ Girl power UP is no mistake ~ As American earrings change the expression of the pierce by adjusting the length of the chain, you can use it in various scenes. Changeable to earrings, the total length is 5 cm. · Material - All K14GF - (Maron pair shape briellet cut) Road light garnet: about 6 mm a. Garnet looks different in color depending on light, angle, etc. b. The pointed side is the back. - Fresh water pearl: 2.8 - 3.2 mm Size - Overall length: Approximately 91 mm * As much as possible we are trying to shoot in colors close to the actual thing, but the impression changes according to the condition of light is the feature of natural stone. ************ Garnet (garnet) January's birthstone Stone Words: Truth, Fraternity, Chastity, Power, Elegance, Guarantee of Victory, Faithfulness Stone's power: ▲ strengthen ties with lovers, sustain and fulfill obstinate love ▲ vigor, physical strength goes bright, makes you look positive, ▲ refreshes your body Attention: It is relatively easy to handle because it has high hardness, it is strong against drugs and heat. After use, use a soft cloth to spray it. Effect Garnet: "symbol of fruit" bringing unchanging love and deep bonds It is said to have the power to activate blood circulation and make it beautiful. Garnet is a stone with the power to activate both the physical and mental energy. It raises a positive feeling towards living and changes negative feelings such as fear and anxiety into bright energy. It is a stone that connects current hardships to results, so it is also recommended as an amulet for career determination and important projects. It is a stone that increases vitality and is a very good talisman for birthing relationships. This stone has been used as an amulet for a long time since it has the power to protect the owner from negative energy. It is said that it brings positive change, as winter changes to spring, because it increases the feelings of love and generous heart. Garnet, which is well known as the birthstone of January, is said to be a "symbol of fruit", going to the goal, fruiting the results of the efforts accumulated as a success, it is said to lead to success. Moreover, the effect of this "fruit" also helps the fulfillment of love. In old traditions, there seems to be sometimes expressed as deep "bonds" such as giving garnet as an oath of reunion as parting with important people, being marked as a sign of friendship. Therefore, it can be said to be a power stone symbolizing "everlasting love" deepening affection with important people. Those wishing for unchanging love with important people are said to be good if you learn as accessories. ************ Road Light Garnet Earrings Road Light Garnet Earrings Road Light Garnet Non Hole Pierce Gift Wedding Present Mother's Day Birthday