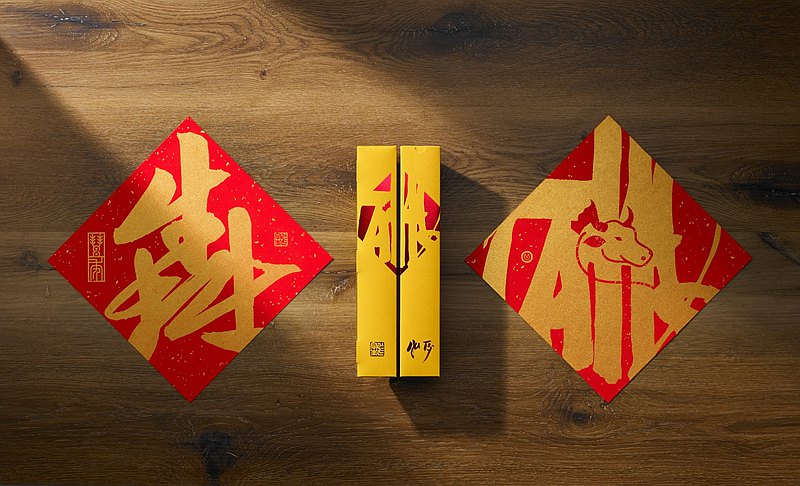 [Free shipping for 6 or more pieces] Last year, Xinyuan Wenchuang cooperated with contemporary calligrapher-Teacher Yu Tongsheng Breaking away from traditional paper and ink, combining the vocabulary of English calligraphy "Mouse&rat" with Kinmen Kaoliang Liquor and Spring Paste The arrival of "Golden Rat Hug Wine" to promote the image of the New Year during the Chinese New Year This year, with the image of "Xin Chou running the bull to welcome the Spring Festival", gin and spring stickers were issued Also invited design master Professor Minglong You to co-design The calligraphy mentions the characters with the Chinese and English collocation of "Cattle & Ben" Calligraphy Aesthetics and Contemporary Aesthetic Design Let the traditional festival no longer just be the same Take a new step in embracing traditional culture Xin Chou Ben Niu Spring Sticker "Cattle & Ben" When the Lunar New Year first arrives, every household will put on a new spring sticker, in addition to the old cloth, the new year will be added. Chinese and English calligraphy aesthetics and contemporary aesthetic design Xin Chounian’s new hope, let us "run" to new heights! "Calligraphy Artist Yu Tongsheng-Introduction" He is a well-known contemporary calligraphy artist in Taiwan and the first Chinese calligrapher in English Using English as a carrier, using traditional calligraphy techniques to show the contemporary spirit of "English Calligraphy" He believes that the meaning of words and words Make the writing of Pinyin characters have personality and emotional projection It’s like the Western text turned to face the Eastern world, and the picture it constitutes is between English letters and Chinese characters Not only the external material image, but more importantly the internal spiritual image We can see the creators stand on the basis of traditional calligraphy Faced with different writing systems and different strokes, the adventures and experiments you want to start "Design Master You Minglong-Introduction" You Minglong is one of the senior and representative figures in Taiwan's graphic design industry Worked on the overall visual image design of the 2017 Taipei World University Games, and was good at Chinese character fashion design His work has won many international design awards, including the famous German Red Dot Design Award