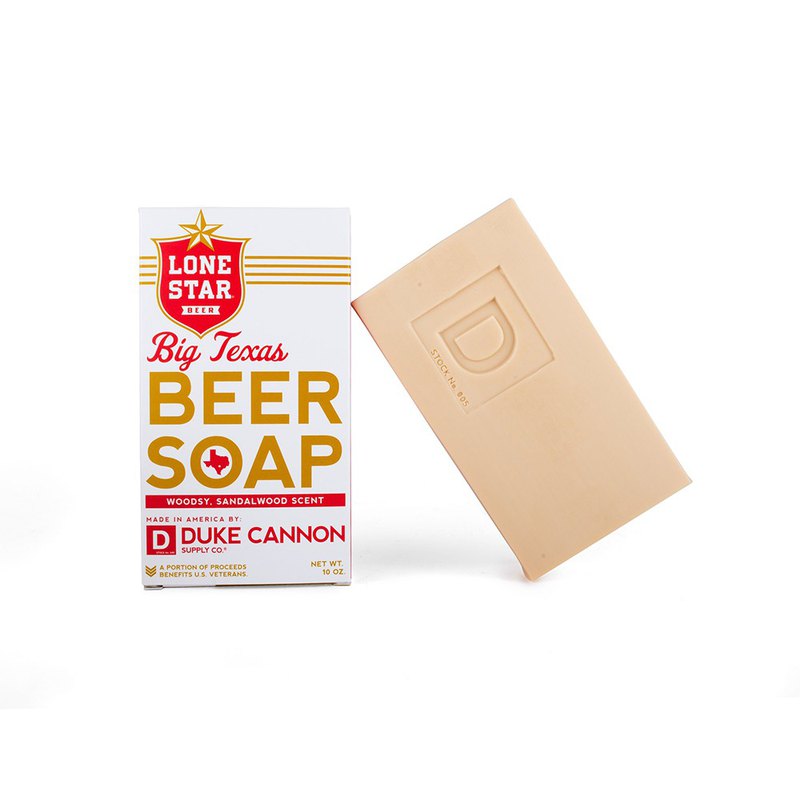 Name: BIGASS "Texas Beer" Big Soap A large American military soap specially designed for real men. Each soap weighs 10 ounces. The size design fully complies with the specifications of the US military during the Korean War. It is also produced by the same US military supplies factory. If your hands are too small to grasp with one hand, use both hands, or use a knife to cut into small pieces! After a short break, dissolve, take a break! (Texas beer recipe) Everything in Texas is great. Whether it is beer or soap, there is one more item now: beer soap. Duke Cannon partnered with Lone Star Beer to produce a Texas version of beer soap-weighing up to 10 ounces. But this soap will not make you smell like a drunk man drinking wine, but a pleasant sandalwood smell. Ingredients: SODIUMTALLOWATE, SODIUM COCOATE AND/OR SODIUM PALM KERNELATE, AQUA, EAU(WATER), GLYCERIN, FRAGRANCE, BEER, TITANIUM DIOXIDE, IRON OXIDES, SODIUMCHLORIDE, PENTASODIUM PENTETATE Size/Weight: each weighs up to 10 ounces Origin: 100% Made in the USA Duke Cannon brand introduction: Duke Cannon is not a brand for everyone, because he doesn't want to cater to everyone. He doesn't care about the generation of your iPhone or iPad, and he doesn't want to visit boutiques with you on the weekend. He came from an era when men would work hard with their own hands, not a world where men gather to discuss what they bought. His philosophy is simple: men want to win, not win-win. Unfortunately, the trend of Hua Mei Nan made the man decadent and weakened the man, so Duke Cannon decided to stand up and let the man pick up the hammer and spade again... (US military cooperation) The brand rejects the so-called Focus Group study of "marketing experts", but simply cooperates with the US Army 2-135 Infantry Combat Force: all products are invented and tested with this unit, if the products do not meet them Demand and strict standards, it will not be listed. https://youtu.be/vmB-he8qYR8