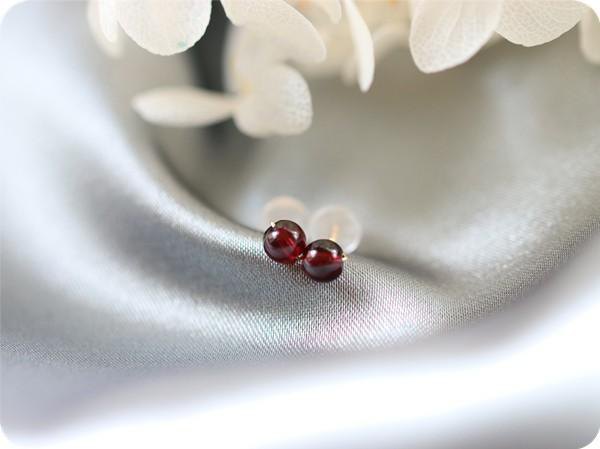 ~ ~ ~ ❄ + 250 yen can be wrapped ♪ ~ ~ ~ Instagram: ralulushu Movies Uploading videos etc. · Material -14 KGF, silicon catch - (round) 6 A rank wine red garnet: about 4 mm Very clean garnet use with very little inclusion ~ · Size - Approximately 15 mm (post part 12 mm) ❄ Garnet is characterized by different colors depending on light, angle, etc.! * As much as possible we are trying to shoot in colors close to the actual thing, but the impression changes according to the condition of light is the feature of natural stone. ************ Garnet: "symbol of fruit" bringing unchanging love and deep bonds It is said to have the power to activate blood circulation and make it beautiful. Garnet is a stone with the power to activate both the physical and mental energy. It increases positive feelings towards living and changes negative feelings such as fear and anxiety into bright energy. It is a stone that binds the current hardships to the results, so it is also recommended as an amulet for career determination and important projects. It is a stone which increases vitality and makes a very good amulet for birth relationships. This stone has been used as an amulet for a long time since it has the power to protect the owner from negative energy. It is said that it brings positive change, as winter changes to spring, because it increases people's love feeling and generosity. Garnet, which is well known as the birthstone of January, is said to be "a symbol of fruit", going to the goal, fruiting the results of the efforts accumulated as a success, and is said to lead to success. The effect of this "fruit" also helps the fulfillment of love. In old traditions, there seems to be expressed as a deep "bond" such as giving garnet as an oath of reunion as parting with an important person, being marked as a sign of friendship. Therefore, it can be said to be a power stone symbolizing "everlasting love" deepening affection with important people. Those wishing for unchanging love with important people are said to be good if you learn as accessories. ************ · K14GF (14 gold gold filed): Unlike thin gold plating of the gold layer, the gold layer of 1/20 weight of the base metal is crimped with heat ************