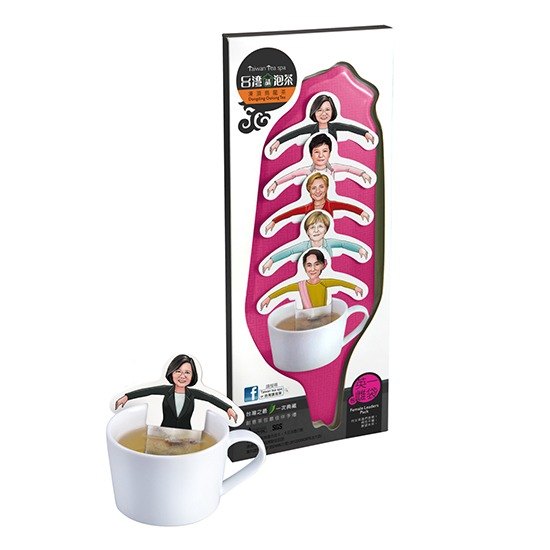 The Taiwan Tea SPA range flavors your tea with unique political figures and Taiwanese culture. Combining local creative ideas with selected Dongding Oolong Tea, the interesting designs and rich symbolism are your best choice whether you are adding to your collection or giving them as gifts. Female Leader Pack A salute to female leaders! The 20th century has seen the rise of female leaders worldwide, raising global awareness for equality. Tsai Ing-wen – The 14th elected president of the Republic of China and its first female president. Hailing from an academic background, she is also a trained lawyer and trade negotiator. Calm and paying attention to details, her balance of rationality and “soft” style of leadership is hoped to realize the future that the people want. Park Geun-hye – South Korea’s president since 2013, she is the first woman president in Korean history, first elected female head of state in East Asia and first president born as a South Korean citizen. Angela Merkel – Current chancellor of Germany. Known also as the “iron lady”, she is the most influential female leader in Europe since Margaret Thatcher. She is also the first chancellor of the Federal Republic of Germany to be raised in East Germany. Aung San Suu Kyi – Burmese politician and winner of the 1991 Nobel Prize for Peace. Her father was a national hero. Aung San Suu Kyi co-founded the National League for Democracy (NLD). In 1990, the NLD won the general election but the results were nullified by the military regime of Myanmar. Hillary Clinton –An American lawyer and politician. Was formerly a United States senator and the Secretary of State, and first of the first ladies of the nation to go into politics. An outstanding female politician, she is a candidate for the Democratic nomination for President of the United States in 2016. Instruction: Place tea bag in cup, pour in 200cc boiling water, steep for 2-3 minutes before drinking.