วัสดุสินค้า
กระดาษ
วิธีการผลิตสินค้า
ผลิตโดยโรงงาน
แหล่งผลิตสินค้า
ไต้หวัน
ความนิยม
รายละเอียดย่อยของสินค้า
The cover of the "Whale and Dolphin" is hand-painted by He Chenghao, a senior commentator of Kuroshio. Based on many years of observation on the sea, it accurately and accurately depicts the characteristics of cetaceans. There are 5 models in the 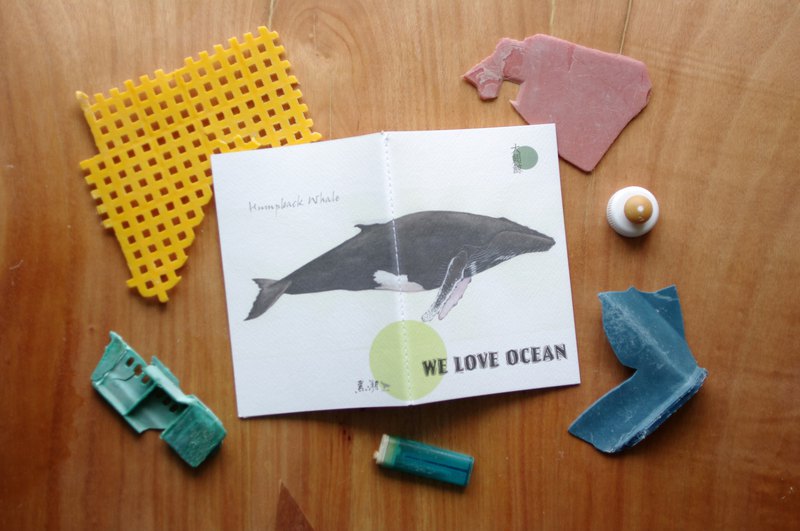 I miss the feeling that I could walk barefoot on the beach. Human activities and waste have a huge impact on the marine environment. The Kuroshio believes that the sea is better, we will be together. "Whale and Dolphin" is a charity sale of the Kuroshio Ocean Culture and Education Foundation. Every purchase you make in the design hall "kuroshio1998" will be properly applied to various marine issues. Including: marine debris monitoring, anti-circle raising animal welfare, whale and dolphins research, marine environmental education. The sea is good, we have a cover together! There are five notebook series: Winged whales, sperm whales, bottlenose dolphins, Freund's dolphins, pseudo-killer whales. Lightweight and easy to carry around, you can record the moment of movement at any time. Size: 13cmX19cm, a total of 32 pages. -------------------------- Humpback Whale (Humpback Whale) | The maximum length is 16m and the maximum weight is 30,000 kg. The big-winged whales are large and thick overall. They are less slender in the family of the baleen whales. The tails are also narrower in the whales and less thick. The adult body is between 11 and 16 meters long and weighs between 25,000 and 30,000 kilograms. The female is slightly larger than the male. . The winged whale has some special features: the ventral area extending from the lower jaw to the pectoral fin has a plurality of longitudinal wrinkles, called "throat pleats", which allow the mouth to expand greatly and help feed. The winged whales have a total of about 12 to 36 throat pleats. They inhale several metric tons of seawater and filter them to leave fish or scale shrimp for food. The big-winged whale's head is broad and round, about 1/3 of the body length. There is a series of knob-like protrusions on the top of the head, called "knuckle", which is like a golf ball. It has rough hair of less than 3 cm in the center and may have a sensory function. In addition to the appearance of whiteness in the pectoral fins, caudal fins, or partial ventral surfaces, individuals appear generally blue-black or dark-gray. They usually act alone, or 2 to 3 together, with a record of up to 15 and a very active personality. They are known for their spectacular waves. The whales’ "jumping waves" are off the surface of the body. Rotating the back of the body in the air, mostly with water on the back, the body may completely jump off the water in the process. It is said that the winged whale can sing the longest and most complicated song in the animal kingdom.