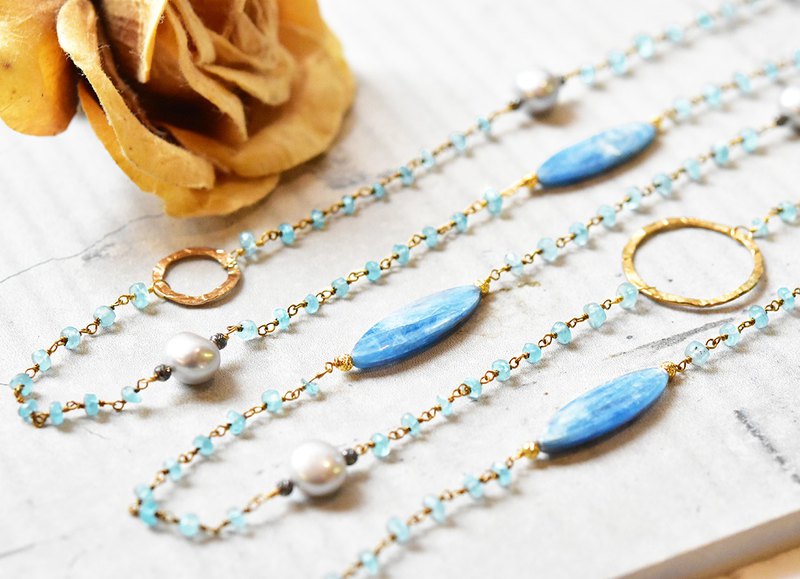 Metal material: 14k alloy Necklace length 42 inches Main Stone: Kyanite 9mm x 40mm With Stone: Natural Pearl 8mm / Blue Chalcedony 3mm ✦Strict selection of natural kyanite natural pearl blue chalcedony ✦Natural Kyanite / Remove concerns about unknowns ✦Natural kyanite / symbol communication ✦Natural pearl / roundness, preciousness, extraordinary temperament Blue Chalcedony / Symbol of a Better Life According to Ji Zai, the top bead on the official hat of the third-ranking official in the Qing Dynasty required the use of sapphire. At the time, the gem identification technology was not as developed as modern. As a result, his value has risen and become widely known. The crystals contained in natural kyanite are flat plate-like or strip-shaped, mostly gray, white, or light blue, with richer levels. When viewed at different angles, different luster will appear, which is very charming. Wearing kyanite can help overcome psychological barriers, remove concerns about unknowns, and assist in the exercise of inherent potential. Because blue corresponds to the throat, it also enhances the ability to express and communicate. Venus, the legendary goddess of love and beauty, was born in a shell. When the shell opened, the drops of water dripping from her turned into crystal round pearls. Elegant freshwater pearls have a soft, full luster, and they don't need excessive decoration to show elegance. Princess Diana once said, "If a woman can only have one piece of jewelry, it must be pearls." Wearing pearl jewelry can bring out extraordinary elegance, and the royal atmosphere of pearls has also been the first choice of gifts for Chinese and western ladies and ladies for a long time. Chalcedony is one of the ancient jade varieties. Ornaments carved from chalcedony can be seen in the cultural relics unearthed in the Stone Age, and chalcedony bracelets also existed during the Warring States Period. 』Smooth and moist, soft lines. Chalcedony is rich in color, translucent and warm colors make people put it down; it is said that chalcedony is the incarnation of the moon, so it can control the tide and water, and make people safe from water. In ancient Greece and Rome, green chalcedony was regarded as a gem with healing power. Alexander the Great of Macedonia carried a green chalcedony with him. He believed that this chalcedony was a lucky gem that helped him win, so it is also said that he wore green Chalcedony avoids harm and brings luck and courage. https://live.staticflickr.com/65535/49387095828_f6f840ff96_b.jpg https://live.staticflickr.com/65535/49120485662_4884570f07_b.jpg https://live.staticflickr.com/65535/49120293371_be40097c45_b.jpg