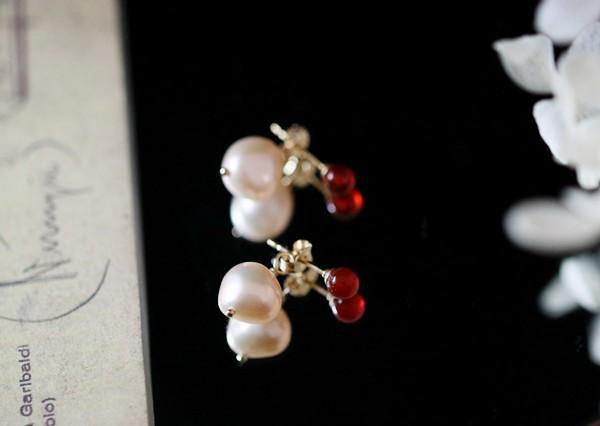 ~ ~ ~ ❄ + 250 yen can be wrapped ♪ ~ ~ ~ Red agate (red agate) January's birthstone Stone's words: health, longevity, wealth, success Stone power: · Protect yourself from disease and bring longevity · Reduce stress and relieve stress · Prevent interpersonal relationships and deepen family ties Hardware part material: 14 kgf stone: (RALULU.SHU is not a cheap shellfish pearl, Swarovski pearl, it is using authentic fresh water pearl with good quality) Why not use shell pearls? The price is cheap, there is no scratch, the shape is also good, but it looks cheap compared to the natural pearl, it looks cheesy, it is not elegant, the person who understands immediately tells it. Light pinkish freshwater pearl (pearl): about 8 - 9 mm Lotus spots and scratches: fewer terises: very strong Red agate: about 4 mm * As much as possible we are trying to shoot with colors close to the actual product, but please understand that the impression changes according to the condition of the light is the characteristic of natural stone. ************ About Red Agate Enhance life force, give power to blood, Omamori stone of the child Red agate has the power awakened by heating aged ions contained in the chemical solution when coloring treatment as well as agate's "power to strengthen ties". It is also known as an amulet of children's treasures, as it has an energy that enhances life force and is said to give power to blood. About pearls It is a birthstone of June. Stone words such as "health, wealth, longevity, purity" etc. Fresh water pearl bringing happiness Freshwater pearls are regarded as stones with strong power to repel disaster. It is said that there is an effect that will prepare the environment so that you can spend happy every day of the person holding it. It has the same effect as a shellfish compassionate pearls and grows in the body, and it is said to be effective as an amulet for pregnant women and easy delivery. For the same reason it is expected to be blessed with children's treasures. Increasing femininity, effective freshwater pearls for beauty and health It is said that freshwater pearls have an effect of raising the motherhood of women and enhancing beauty and femininity when wearing them, and it is said that Cleopatra was worn as a beautiful talisman in the old. When wearing a freshwater pearl, a good side of a woman is drawn out, there is an effect to cooperate, and the appearance is also feminine beauty along with the inner side. From ancient times it has been believed that this stone has the power to preserve youth and health.